7-Week-Old Baby Comes Out of the Silence

Any obstetrician, midwife or doula will encourage expectant parents to talk to their unborn child. He or she can hear for most of the latter half of the pregnancy and may actually learn to recognize the sound of Mom and Dad's voice. But what if they can't? For Lachlan Lever of Victoria, Australia, his gestation—along with nearly the first two months of his life—was utterly silent. 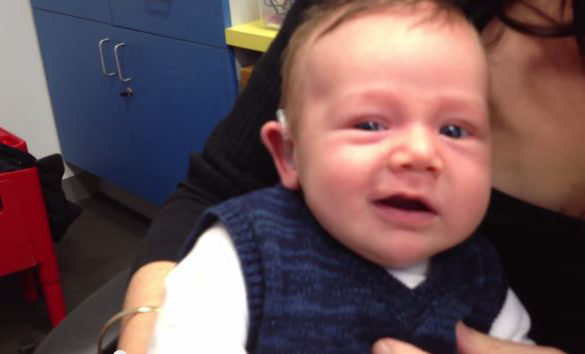 Then, at 7-weeks-old, he was fitted for a hearing aid and those poignant first minutes were captured on video. An expression of joyous wonderment washes over Lachlan's face as his sense of hearing awakens and the sound of his parents' voices fills his little ears. It is a moment that Michelle and Toby Lever, as well as more than 8 million YouTube viewers around the globe, will not soon forget.

"When they turned the headphones on and Lachlan smiled and his face lit up, it was the most magical thing I'd ever seen in my life," Michelle told Daily Mail Australia. "My baby's world opened up!"

Lachlan's first winning smile has been followed by countless others and this lively, talkative little boy—now two-years-old—is meeting the developmental milestones typical of a child his age. Michelle credits early detection for her son's progress. His moderately severe sensorineural hearing impairment was initially diagnosed by a newborn hearing test at 4-weeks-old.

Though the tear-jerking video first debuted two years ago in 2012, it has gone viral in the last few weeks, sharing the Lever family's special moment with the world.

Your challenge: Come up with a few words to describe Lachlan's expression on the video. It's tougher than you think.